Are you looking for sites like humble bundle? If yes, you are in the right place to know some websites and get fun playing games.

A Bundle Game mainly refers to two or more games, which are bundled and sold together, to provide minor discounts to the users. This results in the users buying more than what they could have and saves a lot too. Such bundles can comprise of games as well as other DLC items, which refer to the other downloadable contents of such games.

In Bundled games, there is a physical copy of the actual gaming software, usually in the form of DVD or Blu-ray Disc. This copy is provided to the user for free to allow the user to go ahead and run it.

This article lists the sites like Humble Bundle, and provide great options of Bundle Games for the users: 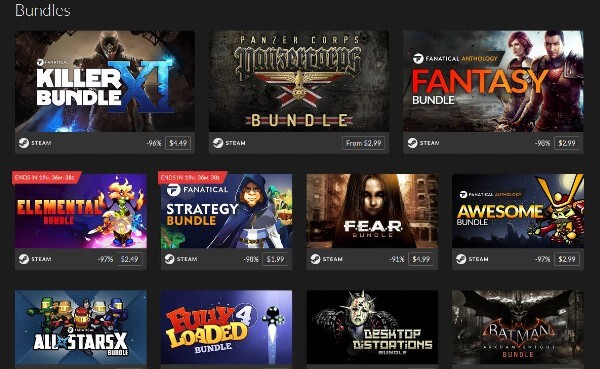 Fanatical is a widely used website for buying Bundle Games for lower prices than other websites of a similar domain. The website comes with the Fanatical Assistant which can be added to the extensions of the system’s browser, to ease out the process of selection of the best deals. It helps the buyers to find better deals for games, along with amazing discount coupons.

IndieGala is a series that includes video gaming bundles just like Humble bundle, but a major difference between the two is that the games on IndieGala are compatible only for Microsoft Windows and with Data Rights Management (DRM). The first bundle was launched in December 2011, when the company was founded.

The games which are presented in IndieGala are majorly Steam Keys instead of directly downloadable games and other content.

Groupees is an independent platform that is known for curated bundles on digital games, music, films, e-books, and more. The company works by running short-term bundle sales for games and more, where the people can name their price on the content that is offered, along with unlocking bonuses and discount coupons.

Greenman Gaming is a company that is known for selling, trading, supporting, and publishing games of different genres created by several gamers. It is a truly global store, which can allow the creators to sell their games at a wide platform.

GamersGate is one of the best sites like Humble Bundle that sells games for more than 250 publishers and developers, including Atari, Electronics Art, 2K Games, SEGA, and Epic Games. Through GamersGate, there are more than 6000 games that are made available for the buyers.

In Bundled Games, there is additional content that is available for the user other than the original game, including DLCs. These also include individually developed games that feature multi-platform support including Windows, Linux, Mac, and Android System. It can also include currency for microtransactions or anything that could be ‘bundled’ with the main game.