Everyone would get bored of the same wallpapers, the similar folder icons, clock, calendar and other desktop tools on computers if customization is not allowed.

Computers are not a purposeful machine anymore. They are being embedded into the lives and lifestyles of people who use them.

A gamer would want his personal computer to look like a fantasy operating system from space. A fashion designer would want it sleek and beautiful matching the attire.

A programmer would like to see it motivated and customized to the core showing of the geekiness in him. A home architect would love to have a blending wallpaper and elegant interface to his taste.

The customization of the same computer desktop is required in a variety of ways by different kind of people.

Rainmeter, being the best desktop customization tool from the old Windows XP days to today’s Windows 10, allows the PC users to customize their desktop with new gadgets and tools that would make it look more beautiful and purposeful.

In this article, I’m going to sort out some best rainmeter themes that would steal the impression right away.

Inspired by the role-play video game series Mass Effect developed by BioWare and Published by Electronic Arts, this rainmeter theme turns the UI into the game UI by creating a visual environment that makes you feel like living in the game. The elegance of black and white background is elevated in this rainmeter skin with a digital music girl on one side of the desktop. The gadgets are arranged around the desktop flawlessly that no one would even guess them updating time to time. The good thing is that the gadgets also get an upgrade individually. You can add skins to the gadgets separately. It is one of the best rainmeter themes suitable for your daughter and nieces while using their user accounts. With clean white background featuring the blue and green representing the water and plants, the ‘Blue Green Fresh’ is one of the cool rainmeter skins that seems to be designed for architects with very nice fonts and gadgets. Designed to win the hearts of music lovers, this skin rainmeter is designed with a dark background, and aero glass lineup along with the circle metered gadgets in dark blue. Dragon Ball is one of the best anime cartoons for 90’s kids, and those who grew up will not miss their childhood if installed this rainmeter theme. All the dragon ball characters will be brought to the desktop, and the icons are changed to dragon balls. If you wanted to live those days once again, fist up to gain the Goku power. As the name suggests, the Serenity rainmeter skin looks decent, calm and futuristic. All the gadgets are designed to give a rich look like as computers in Ironman movie. I would say that it is one of the top rainmeter skins to download by techies for their technologically decorated rooms. Get This Rainmeter Skin

This rainmeter skin will make you feel like as if you are in space. The UI with nicely designed fonts, gadgets and text, will change the working environment into blue space with a planet wallpaper making it feel like if you are operating a computer in Avatar movie. Get This Rainmeter Skin

Featuring the black vector icons on the bright yellow background, this awesome skins standout special in all rainmeter themes. Highlighting the weather reporting as a mainstream, Large Clean Weather skin updates the user with real animated clouds and temperatures. The ‘today’ label will change to ‘tonight’ automatically with time.

It is one of the cool rainmeter skins that helps for the one who have no idea what’s going outside the house while working inside the home. I.e You don’t need to go out and check the weather to plan the daily tasks. The designer worked hard in building this rainmeter skin to look like the actual Helicarrier computers from ‘The Avengers’ movie. The intricate clock, six small and six big launchers to launch the folders and programs looks quite a fantastical technology. All the gadgets are designed carefully to match the theme of the movie. Kudos to the theme designer for researching the UI based on the original Avengers computer UI.

All the gadgets are designed carefully to match the theme of the movie. Kudos to the theme designer for researching the UI based on the original Avengers computer UI. Who doesn’t love to have a Mac.? It is the dream of every techie to have one in a lifetime at least. Apple Mac may be not affordable by many of the aspirants, but it is possible to turn Windows into Mac by applying this top rainmeter skin.

He experience to have a 3D icon room is nothing like anything. It ‘s nice to know that Rainmeter develops skins for bumptop software too. When installed the whole desktop will turn into a 3D cube that looks like we are seeing everything on the display from the roof opened. Last but not the least in my mentioning and also my favorite of all the above best rainmeter themes is this tech neon ring skin. Truly geeky and looks like a computer in a science fantasy fiction movies and is totally adorable on the screen. If you are a techie, you may download this skin rainmeter before you choose any other theme. Rainmeter is a great addition to a desktop software. There are thousands of themes available created by freelancers and official developers on their site, and you may download skin rainmeter according to your preference.

Customization is the key principle of creating ‘new’ operating systems every time. I hope that you have enjoyed the list. Share your valuable opinions about these listed rainmeter themes in the comment section below. 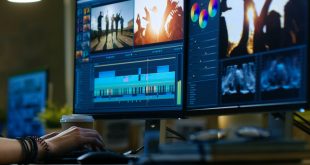 As a YouTuber, you’ll need to edit your videos before uploading them onto the platform. …