Through, this post, you will learn how to detect a hidden camera with your cell phone and thus you can stay safe in the public areas.

Who doesn’t want to have privacy? Everybody does. One of the new Gen and the worst type of exploiting your privacy is recording video or audios and then sharing them without your permission.

Recording video while not informing others might have numerous reasons. It may scale from pranking someone to the maximum level that is recording your personal times.

As we all read news every day, we have encountered into the various scandals, like putting the hidden camera in Hotel bathrooms, bedrooms or trail rooms in cloth centers, which is highly against the law and orders.

So, it is your responsibility to double check the room or place you visit!

Nowadays, technology has grown away long that, hidden cameras are so tiny which you couldn’t even recognize them by close to your eyes. They can be in any form, like shirt buttons, or bulb, door knobs etc.

I think this is the best example of, “There is always will be at least one huge drawback for any technological advancements.” However, we cannot blame the whole technology, we have to find some other ways to stop it, right?

Then, how to be safe in those conditions? It’s simple.

You might wonder, How to detect hidden cameras using Mobile phones? 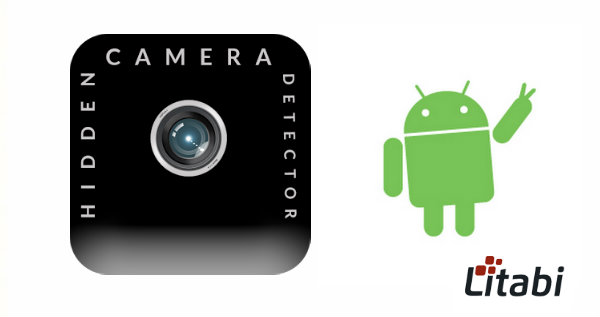 Yes, Smartphones have a solution for that problem.The Android phone store has hundreds of apps that can detect hidden camera within the certain area, well, most of the apps are filled with ads and few even doesn’t work well.

Hence, I have made a list of Hidden camera detector app for android free download that works best in almost all conditions.

Let’s have a look at them!

I could say this is one of the best-hidden camera app detectors available out there. This app is being developed by FutureApps who also developed other utilities and tools for Android devices.

The app helps you to find the hidden camera in two methods. One is an infrared camera and another one is radioactivity detection method. 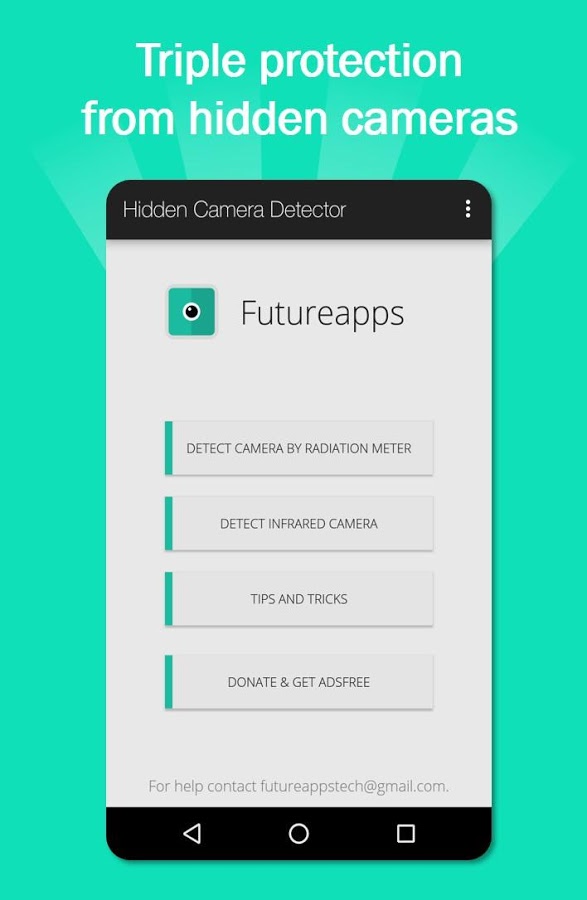 Before utilizing the electromagnetic radiation detection method to find hidden cameras in your surroundings, make sure that your device has the magnetic sensor.

Because this feature functions by tracking electromagnetic radiations that are emitted by cameras and other electronic devices like voice recorder etc.

The infrared camera feature is also available to access for those who don’t have any magnetic sensor on the smartphone.

Even though you can detect infrared rays using normal camera app, this hidden camera detector app provides luminescence effect, which makes it easier to notice any infrared rays coming from your surroundings.

How To Use This Hidden Camera Detector App Android?

You don’t need to be a tech-savvy to make use of this app. This hidden camera detector app for Android free download has simple and easy to use UI with all necessary features built-in.

If you have the magnetic sensor, then we highly recommend you to use radiation meter feature to detect hidden cameras.

Here, you just need to launch the app and move your Android device on all suspicious and possible places where normally people put the hidden camera. Such as – bulbs, vase, bed lamp, showers and so on. 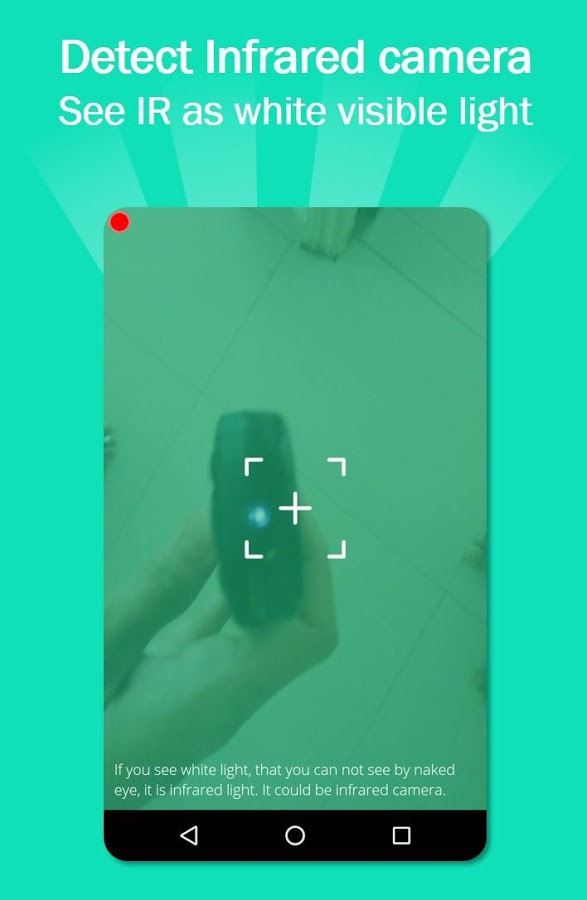 Sometimes, the app may beep over metals as well, which is quite common, as most of the metals are the good conductor of heat and electricity, they possess electromagnetic radiations around them.

But yet, it is more beneficial to perform a double confirmation of those metals manually to find any traces of lens. 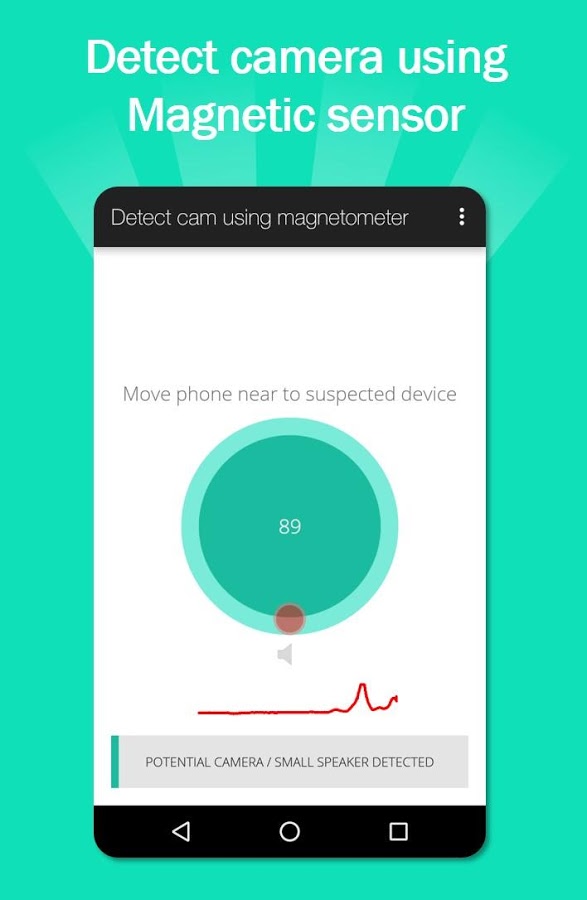 This hidden camera detector app for Android free download is available in paid version as well. The free version is full of crap ads, which is really annoying.

It’s okay if you don’t have any problem with ads, otherwise, you always have an option to buy the paid version with no ads at all. No ads = Happy life xD.

It also works in two ways. You can either use the magnetic sensor to sense electromagnetic signals in your surroundings or use the infrared camera to detect infrared rays that are invisible to your eyes.

You can even use this hidden camera detector app Android as the metal detector. If you found anything suspicious and might be harmful to you, then you can just move your smartphone all over that place, to detect possible weapons made of metal. 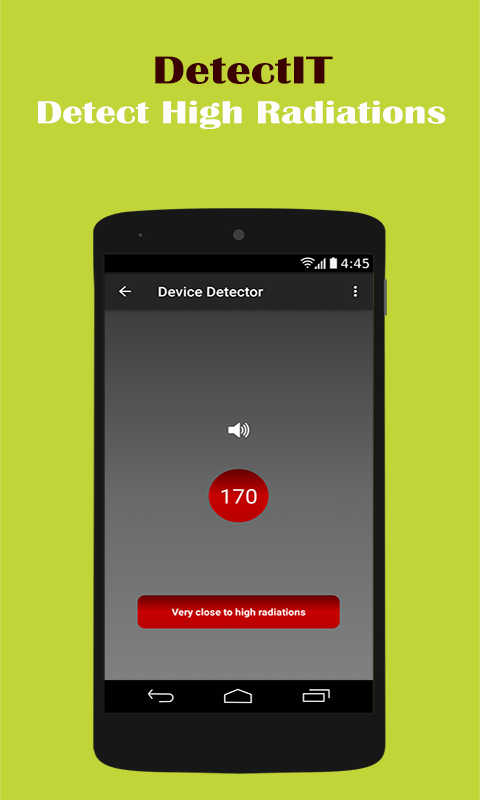 The infrared mode is again the same, all you need to do is, turn on the feature and look all over the room through your smartphone.

If you found any white light blinking or shining, but is not visible to your eyes, then it is definitely some hidden device kept there to sneak into your privacy.

The reason, why infrared rays cannot be seen through eyes is simple. The wavelength of the infrared rays from the camera or any device is longer and the frequency is shorter than visible light, which makes it is impossible for our eyes to recognize it.

Few other hidden camera detector apps that you can use on your Android device are as follows:

You can detect hidden camera with cell phone apps and these are utterly same as the rest of the two that we have already explained in the above section. I don’t want to make you feel bored, by explaining the same features again and again.

Stop lunatics from peeking into your privacy and catch them red handed by using these simple apps that are available at no cost on Google play store.

I hope you have learned how to spot a hidden camera with the helpful apps listed in this post. What’s is your opinion?

Do you have any better suggestion for hidden camera detector apps for android free download? Leave your thoughts in the comment section.

10 Important Steps On How To Create A Successful Mobile Application

Creating a mobile application is one thing, and creating a successful mobile app is another …